Huawei P20 and P20 Pro First Impressions: We have a New Camera King 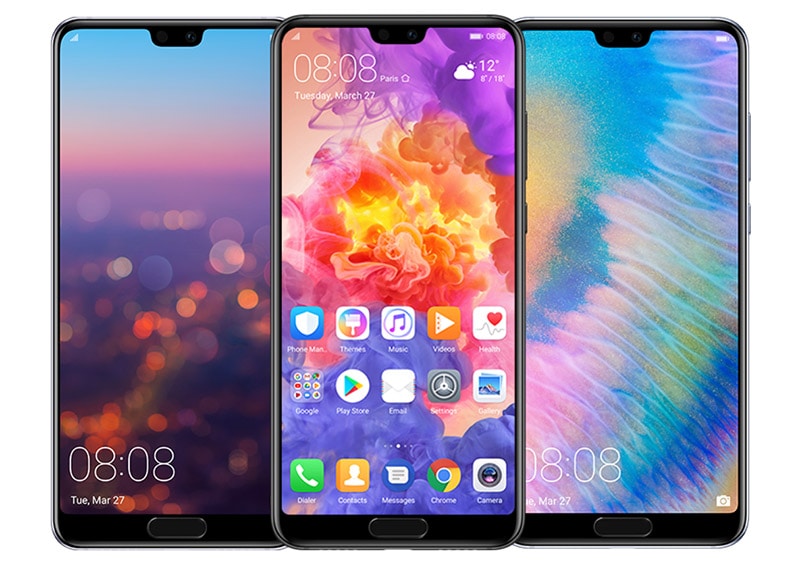 The Huawei P20 and P20 Pro have been announced. We have already gained a first impression of both devices. The emphasis at the event in London was mainly on the P20 Pro with the three cameras on the back. Does the Huawei P20 Pro justify its high price tag and what is the added value of all these cameras? Read below to find out.

The first smartphone in the Huawei P20 series was announced on March 17. It was the Huawei P20 Lite, the mid-range of the line. Today there are two devices added, the regular Huawei P20 and a premium P20 Pro. It turned out that the P20 Pro is a complete smartphone with a number of impressive camera functions. Nevertheless, a number of choices have been made that you can question. Enough to discuss! 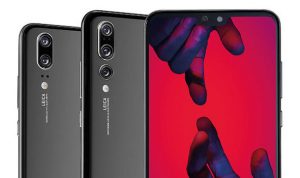 First the naming. This has gone from the P10 and P10 Plus to the P20 and P20 Pro. The reason that a jump of 10 is made instead of one is that Huawei wants to emphasize that the P20 series is really something new, especially in the camera area. Huawei sees this as a rebirth of the P series, also called ‘renaissance’ by Huawei. The first Huawei P smartphone came out in 2013 and was the Huawei P6 (Note: That was the time when I predicted that one day Huawei will leave all these big names behind and my coworkers laughed hard at me. While it hasn’t passed Apple and Samsung, it sure has left brands like HTC, Sony, Nokia, and BlackBerry in the dust). Now it is time for the next step.

The first major change compared to its predecessors immediately struck when I picked up the P20 and P20 Pro. Huawei has embraced the trending glass build instead of the aluminum build.

The reason that Huawei opted for a glass back is to be able to play with color. Metal is still present around the edges. The smartphone already leaves a good impression. Huawei knows how to design beautiful phones. Glass feels very premium but is a fingerprint magnet. A glass back also allows wireless charging, but this function can not be found on both devices which is a shame. Huawei chose to make the wireless charging exclusively to the Porche Design Mate RS which is not great. The aspect ratio of 18.7: 9 creates a nice screen that extends up to the top. The reason that a Full-HD+ resolution has been chosen is to achieve a good combination between sharpness and battery life.

To improve the screen to body ratio Huawei chose to copy the notch from the iPhone X but left a big chin at the bottom. The chin is there to harbor the fingerprint sensor which also doubles as the navigation buttons. This trend of 2018 has not skipped the Huawei P20 series. Also new is water resistance in the form of IP-67 certification for the P20 Pro. Curiously, this is not added to the regular P20. According to Huawei, the P20 Pro is for the people who just want more from their smartphone and is, therefore,  water resistant.

Both the P20 and P20 Pro lacks a headphone jack which is a letdown. As compensation, standard USB Type-C earphones are included in the box with a 3.5mm audio jack to USB Type-C adapter.

Fingerprint Scanner on The Front

As we mentioned above there is a fingerprint sensor at the bottom making up for a sizeable chin. Huawei gave three reasons for making this decision. The first is that one-half of people find a fingerprint scanner at the front finer and the other half at the back. Huawei would like to serve both groups and with the Huawei Mate 10 Pro that already has a smartphone with a scanner on the back. Since there is a notch at the top, 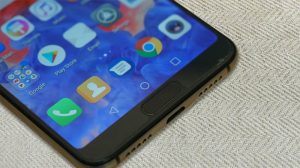 I think Huawei should have placed a notch at the bottom too, harboring a fingerprint sensor. That would have made the phone symmetrical and would have differentiated itself from the crowd but that’s just my thought. 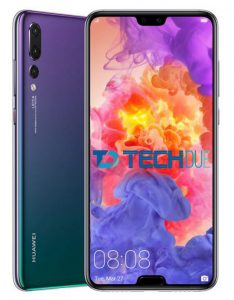 The second reason is that the fingerprint scanner at the front is consistent with what the Huawei P-series has had to date. Finally, a scanner on the front allows it to be used as a replacement for the on-screen navigation buttons by means of gestures. This choice can be made by the user himself.

Both Huawei P20 and P20 Pro come with flagship grade specifications. Both devices have similarities and differences. Let’s first talk about the similarities. Both devices are powered by the Kirin 970 processor. This chipset is made by Huawei itself and made its first appearance in the Mate 10 Pro. The special feature of this chip is the Neural Processing Unit (NPU). This part of the chip is used among other things to take better pictures. 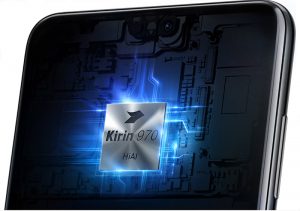 The P20 Pro has more similarities with the Mate 10 Pro. For example, the battery size of 4,000 mAh.  The battery size between the P20 and P20 Pro is different. For example, the P20 battery is 3400 mAh and the P20 Pro is 4000 mAh. In addition, the P20 Pro has standard 128 GB storage coupled to 6 GB of memory. The P20 has to do with 4GB of memory but has the same 128GB of storage. Other memory variants are not planned and expansion via a MicroSD is also not possible.

The emphasis on the Huawei P20 Pro is clearly on the cameras. There are no less than three units on the back, each with their own function. The motto of Huawei is ‘take perfect pictures, always. That is why the focus was not only on the features but also on the easy use of these. The AI capabilities help in this regard using the NPU that is present inside the Kirin 970. However, if you want more control over your photos or want photos with a more natural look you can always turn off the AI in the camera. 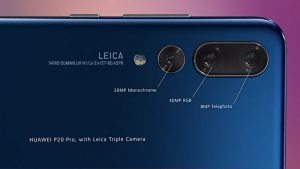 The three cameras of the P20 Pro at the rear were developed together with Leica. The first sensor at the bottom is a 20-megapixel f/1.6 monochrome lens that is used to capture more light and detail. This is a well-known principle of Huawei. The second sensor is a color sensor with a whopping resolution of 40 megapixels and an aperture of f/1.8. This sensor uses a technique called Light Fusion. With this, 4 subpixels are merged into 1 large pixel. This happens per color pixel. This creates the largest sub-pixel so far with a size of 2 microns.

For comparison, the pixel size of the Galaxy S9 is 1.22 micron. The last and top sensor is a telephoto lens with 8 megapixel and aperture of f/2.4. It has 3x optical zoom and can achieve 5x hybrid zoom by means of software. The P20 has two cameras on the back: a 12-megapixel color sensor with an aperture of f/1.8 and a 20-megapixel f/1.6 monochrome sensor. There 2x hybrid zoom.

The P20 Pro can record 960 frames per second with a resolution of 720P for 1 second. Shooting a 1-second slow-motion video at the correct time is a difficult task but it is still a great feature to have. This works more like a demonstration of how 960fps video looks like.

In addition, there are a number of small features that are worth mentioning. For example, the camera is able to recognize scenes via the NPU and adjust the image processing accordingly, but now it can also be used for specific types of food. Then it determines what should be popped out and what not. This goes with an analysis of 30 frames per second when the camera is open.

It can also be determined whether the user is trying to shoot a portrait photo, NPU will make the camera switch to portrait mode in which the background is blurred.

AI is also used for the local search of photos in the smart gallery. You can of course already search photos on topics in apps like Google Photos, but this goes through the server and so you always have to be online. In addition, suggestions are made of the best portrait photos that you have taken in the past month or photos from a year ago.

There is also a color temperature lens available to automatically adjust the color balance of the camera. You can also change the color temperature yourself if you want to. In addition, there is 4D autofocus that closely monitors an object such as a flower in the wind and sets the focus on it. Finally, the camera is also made faster. You can now reach a photo from a black screen in just 0.3 seconds. This happens when you quickly press the volume button on the right side of the device twice.

Software: dealing with the notch

The phone comes with EMUI 8 on top of Android 8.1 out of the box. There is a built-in software feature present to hide the notch.

Both the Huawei P20 and P20 Pro come to the Benelux. Four colors have been announced: Midnight Black, Blue, Pink Gold (Exclusive to P20) and Twilight color (Exclusive to P20 Pro) with a gradient of two colors. The recommended retail price of the P20 is 650 euros and that of the P20 Pro at 899 euros. Both devices are available for sale

The Huawei P20 Pro has three cameras on the back that come in handy in various situations. The results are amazing. The build quality is also great, just like the design. We will have to get used to the notch at the top of the screen. The high price of the P20 Pro creates high expectations because it is exactly in S9 (not the S9+) territory.

How the Huawei P20 and P20 Pro relate to other areas such as speed, battery life, stability and the quality of the cameras in other situations, we will tell you all in the review that comes online later.