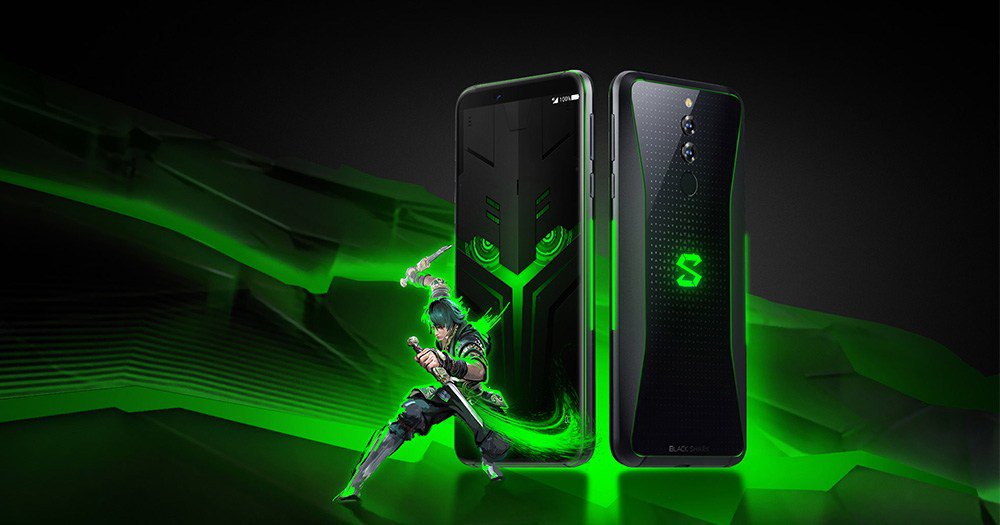 A gaming smartphone differs from a regular phone by focusing on playing games. You can see that in the design and specifications of such a gaming device.

The outside is often more striking and thicker, which is usually because of a larger battery and cooling mechanism. Gaming phones usually have the best hardware you can get i.e a powerful processor, a decent GPU, lots of memory, storage, and a huge battery.

To prevent overheating during gaming, a gaming device is often equipped with an advanced cooling system. Where the average Android phone has a screen with a refresh rate of 60Hz, this is often higher on gaming phones.

A higher refresh rate shows images smoother, which not only go easy on your eyes but also provides lag-free gaming. Finally, with a gaming phone you can usually buy separate accessories that improve the gaming experience.

Black Shark, a sub-brand of the well-known Xiaomi, came with its first gaming smartphone in April this year. The Black Shark phone has been released only in China and has a large battery and liquid cooling system.

Six months after its release, Black Shark has already announced a new version in the form of the Black Shark Helo.

This unit has an improved cooling system and can keep the temperature of the processor twelve degrees cooler than the first generation Black Shark.

The Black Shark Helo is the first smartphone with 10 GB of memory. Previously, 8GB was the maximum. 6GB and 8GB versions are also available.

There are two options when it comes to internal storage i.e 128GB or 256GB. The battery is the same size as that of its predecessor (4000 mAh) and charges via USB-C.

Games can be played on a 6-inch OLED screen with full-HD resolution. The refresh rate is at 60 Hz as high as on regular smartphones. The Helo runs on Android 8.1 (Oreo).

The smartphone comes with a controller having an analog stick that you can attach to the side of the phone. The 10GB version of the Black Shark Helo comes with two controllers.

Xiaomi is currently only delivering the phone in China. The cheapest version costs approximately $569 (500 euros), while the most expensive version costs almost $740 (650 euros).

ASUS has been active for years with its Republic of Gamers (ROG) sub-brand, which focuses on gaming laptops and gaming PCs.

Asus ROG Phone is the first ROG gaming smartphone that was released in September. The device, called ROG Phone, is equipped with a 6inch OLED display with full HD resolution and 90 Hz refresh rate.

Like other premium gaming phones, the Rog Phone runs on a fast Snapdragon 845 processor with up to 8GB of RAM and 256GB of storage.

The 4000 mAh battery charges via USB-C. Thanks to ASUS ‘self-developed cooling system, the phone does not get very hot and the battery lasts longer. The software used is Android 8.1 (Oreo).

There are two stereo speakers on the front of the phone and it retains the headphone jack.

What distinguishes the device are the separately available gaming accessories. These transform the smartphone into a handheld console such as the Nintendo Switch.

ASUS sells various controllers and docks, among other things. The most special dock has its own screen (which is identical to the display of the phone), speakers and external vibrators.

There are also accessories to connect the ASUS smartphone to a large monitor, so you can play mobile games on your LED TV without delay and in high resolution.

The cheapest ROG Phone version costs about $858 (750 Euros) converted and with VAT.

You might know Razer as a manufacturer of gaming products for the computer, but the company now also makes smartphones. A year ago, the first model appeared as the Razer Phone.

The device stood out with its QHD screen with a whopping 120Hz refresh rate, good stereo speakers at the front and powerful hardware. In mid-October Razer presented its successor, the Razer Phone 2.

Nothing much has been changed when it comes to the design The phone comes with a 5.7-inch screen and stereo speakers. Razer has equipped the device with a faster Snapdragon 845 processor, an improved cooling system and support for wireless charging.

The double camera on the back has also been renewed and the phone is now waterproof. Another addition is the illuminated Razer logo on the back of the phone.

Just like its predecessor, the Razer Phone 2 has 8 GB memory, 64 GB internal storage and a 4000 mAh battery with fast charging via USB-C.

Unfortunately, the smartphone still runs on the old Android 8.1 (Oreo) and not the latest version 9.0 (Pie), however, Razer has promised the update in early 2019.

The Razer Phone 2 is available on Amazon for $699.

Mate 20X is the gaming variant of the Huawei Mate 20 which was announced alongside the Mate 20 and Mate 20 Pro. This device is made for gamers and has a huge 7.2 inches screen. The OLED display has a full HD resolution and also supports a stylus.

The Mate 20X is very similar in design to the Mate 20. The difference in terms of design is the screen size.

A new cooling technology keeps the temperature in control. A triple camera is placed on the back of the Mate 20X. The phone runs on Android 9.0 (Pie) with the EMUI 9.0 on top of it.

Huawei will also release a controller (similar the one that comes with Xiaomi Black Shark) later this year that you slide around the Mate 20X. The gamepad has a number of buttons on the left, so you do not have to press the screen.

The manufacturer sells the Mate 20X in a number of European countries for a suggested retail price of 899 euros. Unfortunately, the phone won’t make it to the states although there is a chance that a number of online shops will offer it.

The phone comes with the latest Snapdragon 845 clocked at 2.8Ghz which ensures smooth gaming performance. Top of the line Red Magic Mars comes with a Whopping 10GB RAM together with 256GB onboard storage.

The base model comes with 6GB RAM and 64GB storage capacity. The phone comes with a 6 inch IPS LCD display having a 1080p resolution. We can expect the 3800mAh battery to provide a decent battery life.

There are two touch-sensitive areas on the right side which act as triggers. The triggers provide haptic feedback using a linear motor.

The phone comes with outstanding audio capabilities. There are stereo speakers with DTS 7.1 audio which is expected to offer a very immersive audio experience while playing games.

The phone also comes with a Dongle that combines the USB-C charging and a 3.5mm headphone which is cool. To make things more interesting, the dongle also has a high-quality DAC inside

There is a dual heat pipe and convection cooling system to keep the phone cool while playing heavy games.

The phone comes with Android 9.0 out of the box with Red Magic’s own skin on top of it.