I need to reboot the VM or bare metal Linux machine/server using Ansible and wait for it to come back, but it does not work with playbook as descried here. How to reboot Linux server with Ansible? How do I reboot and wait for reboot to complete in Ansible playbook for multiple Linux servers?

Introduction: You can reboot a Linux or Unix based machine, wait for it to go down (say for kernel update), come back up, and respond to commands. You can use either command or shell module to reboot the Linux server when kernel updated. However, now we have a reboot module to reboot a machine using Ansible. I tested this module with:

Please note that you must have Ansible version 2.7 to work with the reboot module:
$ ansible --version

The syntax is pretty simple to do reboot:

– name: Reboot the machine with all defaults using Ansible
reboot:

How to use Ansible reboot module playbook to reboot the box

Now all you have to do is run playbook (see how to set and use sudo password for Ansible Vault)
$ ansible-playbook -i hosts --ask-vault-pass --extra-vars '@cluster.data.yml' reboot.yml 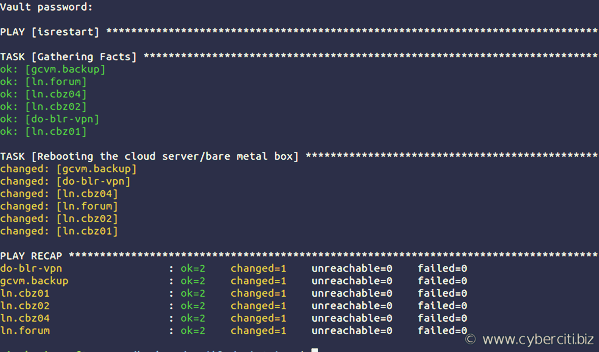 How to reboot a machine and set time out value

By default whoami command used by ansbile. You can change it as follows:

One can force Ansible to wait after the reboot was successful and the connection was re-established in seconds as follows:

– name: Unconditionally reboot the machine with all defaults
reboot:
post_reboot_delay: 180

The above is useful if you want wait for additional networking/storage or server vpn to kick in despite your connection already working. You can also set time for shutdown to wait before requesting reboot:

– name: Unconditionally reboot the machine with all defaults
reboot:
pre_reboot_delay: 180

You just learned how to reboot Linux/Unix box and wait for reboot to complete in Ansible playbook. For more info see this page here.