Bash check if string starts with character such as #

My bash shell script read a config file line-by-line using a bash while loop. I need to check if a string stored in $var starts with some value such as # character. If so I need to ignore that value and read the next line from my config file. How do I check if variable begins with # in bash shell scripting running on a Linux or Unix-like operating systems?

Introduction – In bash, we can check if a string begins with some value using regex comparison operator =~. One can test that a bash variable starts with a string or character in bash efficiently using any one of the following methods.

Bash check if string starts with character using if statement

if..else..fi allows to make choice based on the success or failure of a command:

Bash check if a variable string begins with # value

The syntax is as follows to read a file line-by-line:

The continue statement resumes the next iteration of the enclosing while loop, so it skips rest of the commands when commented line found out.

How to use regex comparison operator =~ if string starts with character

The syntax is as follows to see if $var starts with “#”:

Therefor the following is an updated version:

The case statement is good alternative to multilevel if-then-else-fi statement. It enable you to match several values against one variable. It is easier to read and write: 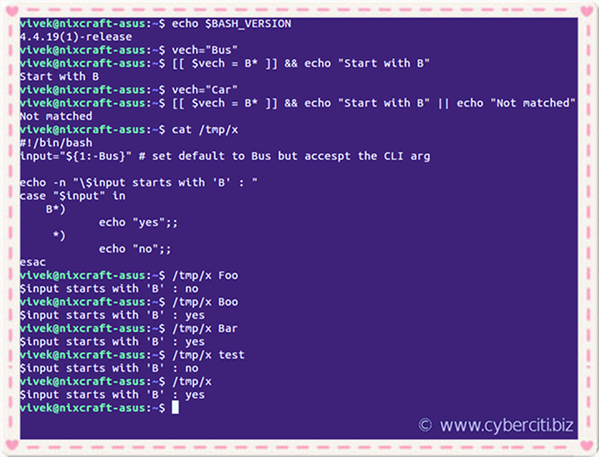 You learned how to check if a string begins with some value using various methods. For more info read the bash command man page here.