How To Use grep Command In Linux / UNIX

The grep command is used to search text. It searches the given file for lines containing a match to the given strings or words. It is one of the most useful commands on Linux and Unix-like system. Let us see how to use grep on a Linux or Unix like system.

The name, “grep”, derives from the command used to perform a similar operation, using the Unix/Linux text editor ed:
g/re/p

The syntax is as follows:

How do I use grep to search a file on Linux?

You can force grep to ignore word case i.e match boo, Boo, BOO and all other combination with the -i option:
$ grep -i "boo" /etc/passwd 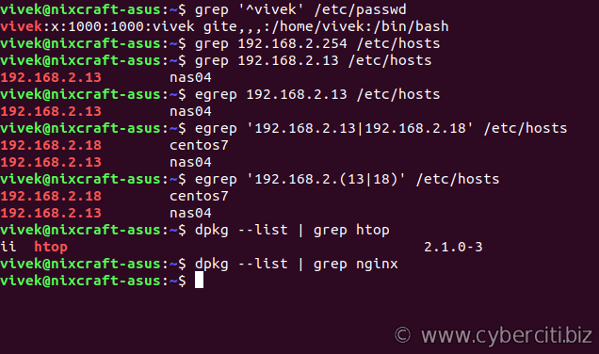 How to use grep recursively

How to use grep to search words only

When you search for boo, grep will match fooboo, boo123, barfoo35 and more. You can force the grep command to select only those lines containing matches that form whole words i.e. match only boo word:
$ grep -w "boo" file

How to use grep to search 2 different words

Use the egrep command as follows:
$ egrep -w 'word1|word2' /path/to/file

How can I count line when words has been matched

The grep can report the number of times that the pattern has been matched for each file using -c (count) option:
$ grep -c 'word' /path/to/file
Pass the -n option to precede each line of output with the number of the line in the text file from which it was obtained:
$ grep -n 'root' /etc/passwd
Sample outputs:

How do I list just the names of matching files?

The grep command in Unix/Linux summary is as follows:

If you enjoyed the grep tutorial, then you might like to read our “Regular Expressions in Grep” tutorial. You can view gnu grep man page here.