If you’ve been using iTunes for a long time, you may have noticed how it changed from a good music player into a strong multimedia player, became a music, video, and app store, as well as a file and device manager for syncing, backing up, and restoring iOS devices.

Lost in all the changes was its original strength: simply playing and managing media on a Mac.

If iTunes now seems a bit unwieldy to you, there are alternatives available that can likely meet most of your needs. The key word here is “most” of your needs. As far as I’ve seen, there’s no single iTunes replacement that can do everything iTunes does. But if your main interest is playing media, or organizing your multimedia library, there are quite a few alternatives available. If you’re looking for an app to manage your devices, perform backups, and transfer files between devices, there are some good choices for that as well.

Swinsian – Free trial; $19.95
If you’re looking for a media player to play music and manage your libraries, Swinsian may be a good fit. Swinsian is easy to set up; it can import your existing iTunes music library, and you can set up specific folders for Swinsian to monitor. Drop an album or track into one of the folders, and Swinsian will import it into its library for you. 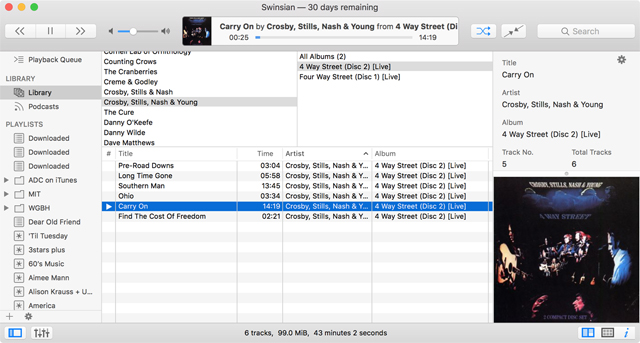 (Swinsian displays your media library in a compact but customizable window.)

And while being able to play music on your Mac from different file types is helpful, it can be a problem when you want to transfer a music file to your iPod or IOS devices. Swinsian has you covered there, with automatic transcoding of file formats to ones supported by the device you’re moving them to. No need for a separate app to translate file formats.

Plus many more features.

Swinsian’s interface will remind you of iTunes before it became so bloated with features. The interface is easy to move about in; using the music browser simplifies finding music. And the interface is highly customizable, allowing you to rearrange and add information as you see fit.

If your main need is for a versatile and easy-to-use music player, Swinsian is a good choice. Its focus is being a music player, and library and playlist manager.

Fidelia – Free trial; $29.99
Fidelia calls itself a premium music player for the Mac. It achieves this by concentrating on the quality of audio playback, the ability to support three audio tool plug-in banks that allow you to select audio units you wish to use, such as a graphic equalizer, peak limiter, compressor, and many more. Fidelia makes use of the Mac’s 22 built-in audio units, as well as supporting other 64-bit audio plugins. Of course, you can also choose to turn the audio units off, for a straight audio path with only the file’s format and bitrate determining sound quality.

(Fidelia’s player is one of the best sounding and best looking.)

However, even the audio purist will find that Fidelia’s additional audio processing features, including CanOpener, a headphone processor, Good Dither, and Goodhertz, a sample rate converter, will help ensure that you’re listening to the best sound possible from your Mac.

Fidelia’s primary focus is on music playback. It can make use of your existing iTunes music library, including any playlists you may have, but the music player itself only has rudimentary playlist editing and library management.

Fidelia can process a number of music file types including:

Playback can use your attached headphones or speakers, as well as any AirPlay enabled device. Load the Fidelia for iOS app onto your iPhone, iPad, or iPod touch, and you have a full-featured remote control for the Fidelia music player running on your Mac.

Fidelia’s user interface is the least iTunes-like of the bunch. Instead of a list of music in your library or your playlists, the major focus of the interface is an image of a music component you may find in your home. A large volume knob is flanked by a display showing the currently playing title, VU bar graphs, transport controls, including play/pause, and the three audio effect plugins that are in use.

The volume knob takes some getting used to; you adjust the knob by moving the cursor vertically or horizontally (set in the preferences), and not by using the pointer to rotate the volume knob.

The library and playlists are displayed in a separate window that can be closed when not in use.

Fidelia is for those looking for the best quality in music playback.

Musique – Free; donations accepted
Musique bills itself as a finely crafted music player, and I have to admit, Musique looks gorgeous, with a clean interface that, for the most part, is easy to use. You can view by artist, album, folder, and song title. 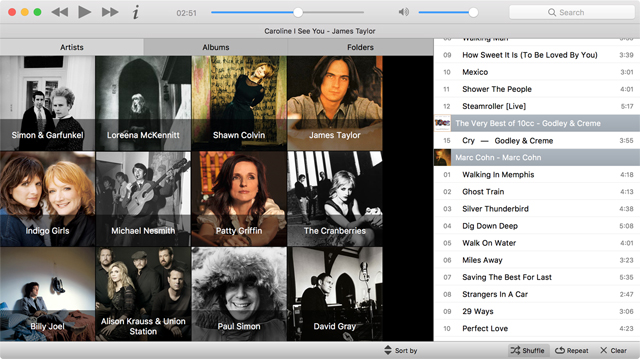 Musique can only scan a single folder for music it may contain. Yes, there can be subfolders within it that Musique will happily look through, but since it only allows a single folder to start the music scan at, if you have other music stored somewhere else on your Mac it will not be available to Musique without resetting the music folder.

A single playlist is supported that can be manually created by dragging and dropping artists, albums, folders, or individual songs to the playlist. The playlist can be reordered by dragging-and-dropping, and Musique supports shuffle and repeat play options.

Musique can put an end to misheard lyrics. If you use the Info button, a description of the artist, as well as the lyrics for the currently selected song, are displayed.

Musique is available for Mac, Debian, and Ubuntu, as well as Windows.

If you’re looking for a basic music player with a few frills, Musique deserves a listen.

WALTR 2 – Free trial; $39.95
WALTR 2 is the iTunes replacement for those looking for an easy way to upload content to an iPhone, iPad, or iPod touch. Actually, WALTR 2 goes even further and supports older iPods, so if you’re still using an iPod classic and want to add new music to your older iPod, WALTR can do that for you. (WALTR 2 uses a drop zone for uploading files to your iOS devices.)

WALTR 2 developer Softorino spent years researching the protocols used in each generation of the older iPods to ensure that WALTR could communicate with and write data to all iOS and iPod devices. That’s quite a feat, especially when most file utilities are abandoning the older models.

WALTR uses a drag-and-drop interface. Simply connect your device via USB to your Mac, or, if your iOS device is available via Wi-Fi on your local network, WALTR can find it and make a connection. Once connected, WALTR opens a drop zone where you can drop files you want uploaded to your devices.

WALTR detects the type of files you want uploaded and moves them to the correct location on your device. Music is moved to your music player, videos to the TV or Music Video section of the Video app, and eBooks show up in iBooks. Softorino calls this ACR (Automatic Content Detection), and not only does it ensure the file ends up in the right place, but it also fills in missing tags, such as title, genre, episode description, and actors.

WALTR does more; need a new ringtone? Just rename an M4A audio file to M4R, and WALTR will take care of the rest. Have Hi-Res audio files? WALTR supports audio with bit rates up to 192 KHz. Video files include support for 4K formats, as well as subtitle conversion, so the closed captions are readable on the smaller iOS devices.

WALTR 2 may just the app you’re looking for if your main use of iTunes was file management on your iOS or iPod device.

SynciOS for Mac – Free
If you’re searching for an app to perform general iOS management, SynciOS for Mac may be the answer. It performs many of the tasks you normally use iTunes for, including: 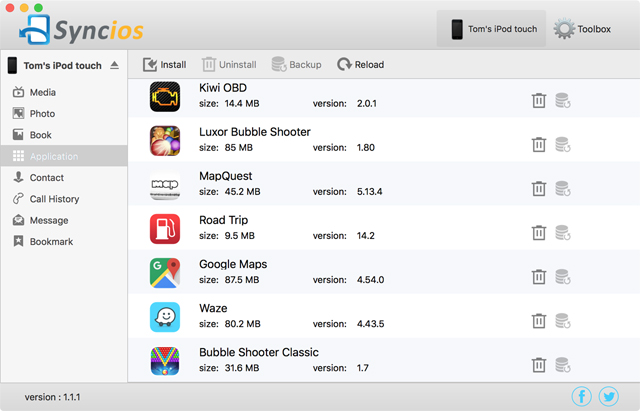 (SynciOS has an easy-to-use interface that allows you to manage syncing files and apps between your Mac and iOS devices.)

That’s quite a bit that SynciOS can do, but wait; there’s more. If you’ve used iTunes in the past to back up your iOS device, you likely have one or more device backups stored in iTunes. SynciOS can extract the backup data from iTunes for you to use. You can also edit bookmarks you’ve stored on your iOS device.

The basic features of SynciOS are free, but there are also a number of premium services available, such as transferring data between multiple iOS or Android phones, as well as data recovery, to retrieve lost Contacts, Messages, and photos, that are available at extra cost.

Overall, using SynciOS is fairly intuitive, and the developer’s website includes FAQs, walkthroughs, and a PDF manual to assist with any task you’re performing.

SynciOS performs many of the tasks iTunes is used for, but not quite all of them. While it can play the music on your iOS device, it’s not a good media player, and of course, there’s no substitute for the iTunes Store for acquiring apps, music, books, and videos.