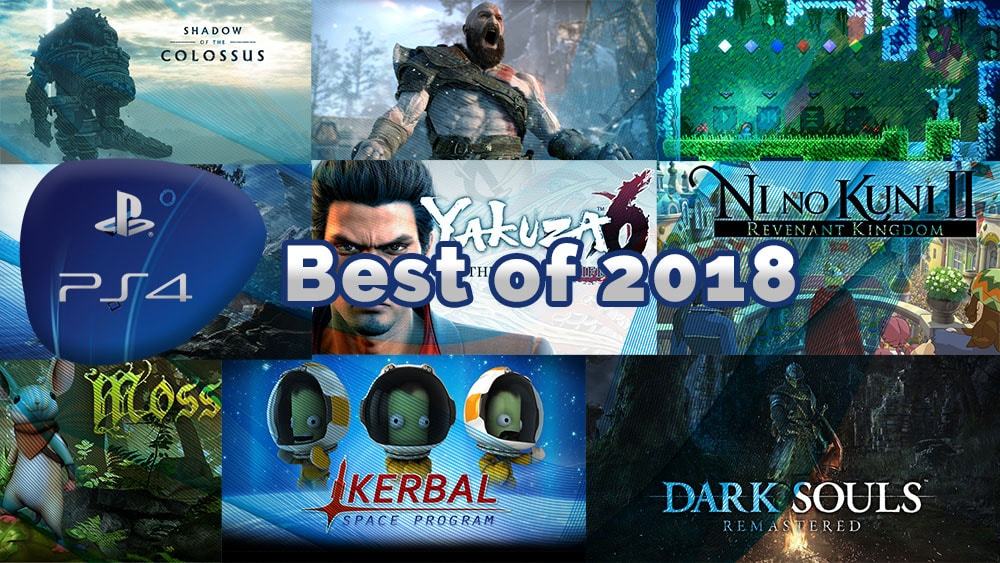 Here is our list of the top 10 best PS4 games for the year 2018.  Since it’s mid of 2018 and there have been a number of great games released so far, it is a good time to create our list.

There are hundreds of PS4 games released every year. Some are great, some are not so great and some are damn boring not worth playing. If you have bought new PS4 wondering which games you should buy this year, well, we are here to help. These are the PS4 games that have been released this year so don’t curse us if you don’t find some other great games released in the past years in this list.

The list is based on the popularity and to some extent, our liking and everyone has his likes and dislikes so pardon us if you don’t like any game included in this list. For your comfort, we have included gameplay trailers of each game so that you have a little idea about how each game looks like. Let’s get straight to the list of the top 10 best PS4 Games released this year.

Dark Souls: Remastered is a reworked remake of good old Dark Souls released in 2011. As an awakened undead, your job in the Lordran kingdom is to search for the two bells of revival and find out more about the sinister curse on Lordran.

Dark Souls is known for its high level of difficulty, which requires absolute concentration and skill on the gamepad because literally, every opponent can kill you. The game is highly recommended for those who like to play heavy and challenging role-playing games.

Kerbal Space Program is a sandbox space simulation. The little Kerbal wants to explore space and it needs your help. You have to build and maintain a space station and navigate through space.

The game has a higher level of difficulty because despite numerous tutorials. Kerbal Space Program is a rock-solid simulation. Mass, center of gravity and aerodynamics play key roles in the game. They influence the flight characteristics and of course the fuel consumption. The control works better thanks to analog sticks than on the PC. If you are a fan of games like Space Engineers and Astroneer, you will love Kerbal Space Program.

Moss is an action-adventure puzzle game for PlayStation VR in which you control the little mouse, Quill. Your task is to solve puzzles, fight and explore the landscape.

The game lets you experience the action from the third person perspective, a very unusual for a VR title. Not only do you control Quill through the game world, but you can also interact as a player with the world. The game dispenses with camera movements and is therefore also suitable for stomach-sensitive VR players. The game is a real treat for those likes to play games like Crash Bandicoot and Yooka-Laylee.

Ni No Kuni 2: The Fate of a Kingdom tells the story of Evan, who has to assume his role as King earlier than planned and travels through the Fantasy Realm with a group of companions to show that he is perfectly capable of the job. In addition, a character from our world appears with Roland just like Oliver in the first part.

The battles take place in real time. In addition, there is a separate strategy mode in which you lead small armies in a top-down perspective into battle. You can gradually expand your kingdom. The is a perfect fit for the fans of Japanese RPGs like Dragon Quest and Ys VIII.

In Dragon Ball FighterZ you fight with all sorts of characters of the Dragon Ball universe. In the campaign, you follow a fictional story. Dragon Ball fans can look forward to many allusions.

In the campaign, you move your team in the form of an icon over a map reminiscent of a board game. There are only a limited number of moves available, and ramifications make you decide on a smart path to the boss. The tag team battles in Dragon Ball FighterZ are comparatively long. Fans of 2D games like Guilty Gear Xrd, BlazBlue Central Fiction and The King of Fighters 14 will love it.

Yakuza 6: The Song of Life revolves around organized crime in modern Japan. As in the previous Yakuza games, you slip into the role of Kazuma Kiryu, who has now visibly aged and his criminal Karrie now considered a big mistake. Expect many close combat matches, mini-games and missions in an open world again.

The Yakuza series is heavily story-driven with many cutscenes and is often compared to GTA, but relies on fist fights. In Yakuza 6, there are no changes of perspective, you only control Kazuma. Fans of action games like Sleeping Dogs, Shenmue and GTA 5 will find the game a lot of fun to play.

4. Shadow of the Colossus

Shadow of the Colossus first appeared in 2005 for PS2. In this game, you play as a young warrior who has to defeat a total of 16 Titans in a mysterious, empty country. The remake for PS4 offers completely new graphics and a new controller. The original gameplay can, however, be selected in the options.

Shadow of the Colossus is practically only boss fights, each colossus has its own weak points and requires a different tactic. The game is highly recommended for the fans of Sentimental games with strong character bonding like The Last Guardian and Ico.

Monster Hunter World lets you explore several large-scale areas, collect items such as mushrooms and herbs, and hunt over 30 monsters. From their resources, you make more and more weapons and armor. So expect a loot spiral.

Monster Hunter World is for the first time set in an openly designed game world and can be played with up to three other players in a group. The monster battles sometimes play like thrilling boss fights. You must defeat the monsters multiple times to gain enough material for new armor. You have to like the eternal Grind.

If you are a fan of games like like God Eater 2 and Destiny 2, you will love this game.

Celeste is a sophisticated 2D platformer in which you run, jump and climb through trap-lit levels. It’s about climbing a high mountain. On the way to the top, you will always face new challenges. You must master the Dash-Move to avoid deadly spines, chasms or enemies. Celeste is extremely varied,  pleasant and demanding. The game is a real treat for the fans of Demanding 2D platformers like Super Meat Boy, Shovel Knight, and Towerfall: Ascension.

In God of War, you play as the serial hero Kratos, who is accompanied by his offspring Atreus. You fight with an ax through spectacular scenes of Norse mythology and solve various puzzles.

The game revolves around the tense relationship between father and son. However, the so-called Nordic gods know of Kratos’ past and the fallen Olympus, which is why they are evil spirits of the god slayer.

God of War, for the first time, is changing the setting from Greek mythology to the Nordic mythical world. Atreus automatically supports you in combat, but can also be manually challenged for attacks. Also new is the loot system, you will find different armor parts and reinforcing crystals for Kratos.

Those who love to play action-packed games like Devil May Cry, Ninja Gaiden and Darksiders 2 will find the game a lot of fun to play.

Top Gaming Accessories & Setup of 2021 To Examine Your Console

Handy tips to let you fast level in WoW TBC!