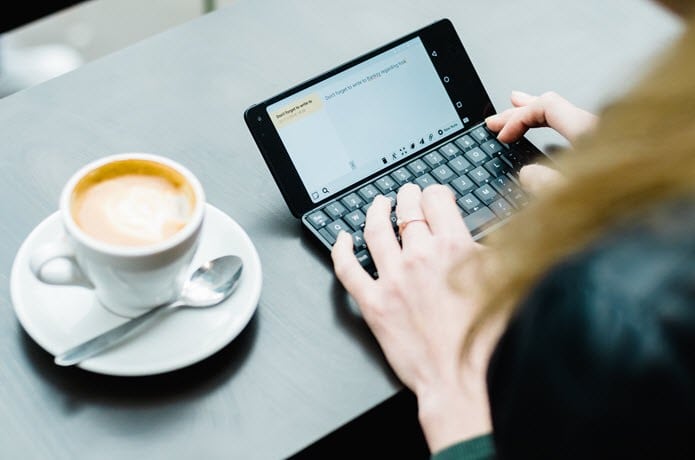 Remember the Nokia Communicator the clamshell phone with a complete horizontal keyboard? Looks like it has a successor in the works but not by Nokia but a company called Planet Computers.

A new campaign on the crowdfunding website IndieGoGo comes with a device that has both smartphone and laptop ambitions.

The Cosmo Communicator is a remarkable creative project on IndieGoGo. The device is primarily a smartphone but also has a nice physical keyboard. The keyboard folds open like a bookcase. The idea is that you will use your smartphone more for tasks that you would otherwise do using your heavy laptop. The Communicator would be much better suited to quickly edit a document than the average smartphone.

The specs of the device seem to be midrange. It has a 5.99 inch LCD screen with sturdy bezels in which stereo speakers can be found. The display has a Full HD resolution and the device has a hinge with which you can open the qwerty keyboard. There is a small secondary at the back screen using which you can perform quick actions. You can immediately see notifications or answer calls without having to open your device.

The start-up has opted for a Mediatek Helio P70-SoC with separate AI-processor, but this is not discussed in more detail. The Communicator also receives 6 GB of RAM and 128 GB of storage. Furthermore, it has a solid 4220 mAh battery and runs on Android Pie. The Cosmo Communicator wil also run Sailfish OS and Debian Linux using multi-boot option which is interesting. More Interestingly, the Communicator has a USB port on both sides of its physical keyboard. There is also a button with which you can immediately call Google Assistant.

For now, it is only a project on IndieGoGo and not a finished phone that everyone can already buy. Those interested in this phone can take a look at the project via this link. In the meantime, the promoters have raised $ 560,000 from the 200,000 requested. They even have a month left. The Cosmo Communicator would cost $ 549 if you order it now, and later it would cost $ 799, converted about EUR 695. The estimated delivery date on the crowdfunding page is May 2019.