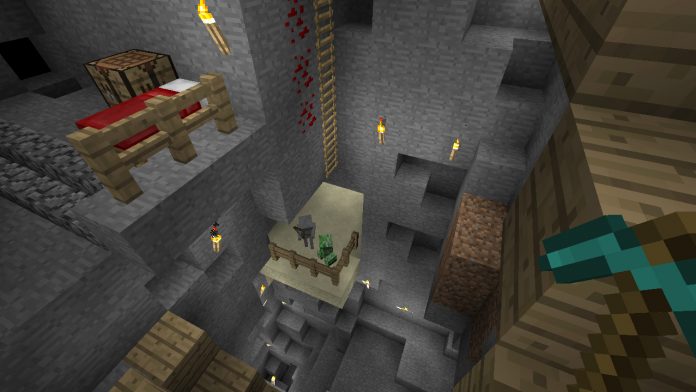 HiveMC is one of the biggest Minecraft servers around today.

Pre-review note: Whether you live in the States or Europe you can play on either “US” or “EU”

HiveMC is a server where you choose from a bunch of different lobbies, then while in the lobby,

players vote for what map they want to play.

So the first game on our list is Hide n’ Seek! The game starts with one seeker, and 23 hiders. The hiders are disguised as various blocks that are in the game and will have 30 seconds to hide before the seeker comes after them. Once a seeker kills a hider, the hider also becomes a seeker.

When the timer reaches 230 seconds, the hider will receive a wooden sword with the ‘Knock-

back’ enhancement. Each game lasts 300 seconds and if the seekers kill all the hiders in that time, the seekers win. If the hiders stay hidden for that time, hiders win. Now there isn’t much going on in this game. Even though it’s a popular game, unless you’re a YouTube commentator

playing with a few funny friends, you may find yourself getting bored with this game.

The next game on our list is the famous, absolutely amazing Survival Games server! In Survival Games, everybody starts out surrounding a bunch of chests. Most of the middle chests have more valuable items than the chests scattered around the map. You will need to find armor, weapons, and food. If you are new to Survival Games, you may get frustrated trying to find the right strategy to get good at it. Once all but 4 players are killed, they will be sent to a DeathMatch Arena. Last man standing wins. This game is one of the more popular Minecraft game types, and once you have practice, many people love playing Survival Games.

The next game is Cowboys and Indians. In this game you and 23 other people are put on two

different teams, Cowboys or Indians. One person from each team will be assigned the role of

leader. Each team will try to catch the leader of the opposing team and bring them back to their

base. Both teams will get leather armor, a wooden sword, a bow, and arrows. You will also get 3

special abilities. A Slime Ball called “Hulk Smash” that launches a person up in the air. You also

get sugar called “Speed Boost” which as the name entails you get a speed boost. The last ability you get is glowstone dust called “Invisibility” which, as the name suggests, it makes you

invisible. I found this game to be extremely fun but there is one problem…my teammates. If the

leader gets captured, everyone has their back turned and isn’t doing anything. This game would be better played if you had a team of people that you knew. Other than that, this is a very

different and creative game, but is still amazing.

The next game is a recently added game on the server, Cranked. Now this is a new game that I

had never played before so I didn’t know what I was getting into. But wow, when I first played

it, it blew my mind! This is an all for one PVP. You have 3 classes to choose from. The first is Tank. With Tank, you get a wood sword, full chain mail armor, and normal walking speed. The

second class in Scout. With Scout you get a stone sword, leather armor, and a faster walking

speed. The last class is the Bow class. I don’t know the Bow’s class real name because of a glitch going on now. The Bow class comes with a Powered Bow leather armor, and normal walking speed. Each round lasts for 600 seconds. When you get a decent kill streak you will be able to use an explosive but it is a sacrifice. Like I said before, this game blows my mind. I’m not too good at PVP games but something about Cranked makes it special. This is another game that may have a steep learning curve – You may be sobbing in anger at first!

The next game is Trouble in Mineville. At the start, you have 60 seconds to fine chest that

contain items such as weapons and armor. You will be given a role of either Traitor, Detective, or Innocent. If you are an Innocent you have to survive. You have to kill traitors to do so. If you are a Traitor, you kill everyone. And if you are a Detective, you use you ‘Detective’ stick to find

information of dead people and help the Innocent to find out who are the Traitors. This game can be confusing, but still fun.

The next game on this server is Splegg! Splegg is a famous game in Minecraft originally played

with your bare hands or a shovel to break blocks under you opponents. All servers had tried to

take the game and add their own little twist. In the Hive’s Splegg, they kept the tradition of the

shovel, but with a twist, it shoots eggs. The eggs allow you to break blocks from a distance rather than having to get close to someone. These maps have different levels so you don’t die

immediately. Not much I can say about Splegg other than it’s a timeless classic! It’s like the NES, but Minecraft. I could play this for hours!

The next game on the server is The Herobrine. The classes to pick from are Archer, Priest, Scout, Demo, and Wizard. You play with 15 other people. One of these people will be chosen to be Herobrine. Each of the classes have different abilities to help other players and kill Herobrine. Herobrine is invisible making the game hard. There are 3 shards in the game that when the player obtains them, they become stronger. These shards can be found where lighting strikes and if you have a class like Demo, you will get a compass to help find the shards. If Herobrine kills everyone, Herobrine wins. If the players kill Herobrine, they win. Now because Herobrine is invisible, you may not get in the action. So, if you happen to cross Herobrine’s path, you will like this, if not, then maybe not.

One in the Chamber

The last game on the server is One in the Chamber. Your only weapon are a wooden sword, a

bow, and 1 arrow. The arrows are 1 hit deaths and every time you kill someone, you get another

arrow. You get 5 lives and are represented as redstone. The person with the most kills by the end of the round 180 second wins. This game is fantastic! Seriously, I thought Cranked was new and alternative, but this is really alternative. For those who are getting tired of the same Minecraft game types — Just play One in the Chamber for a while!

So overall, this server is directed to the PVP lovers with games such as Survival games, Splegg, One in the Chamber, and then there’s Hide’n’Seek for your girlfriend to play. All jokes aside, I really liked this server. HiveMC has a good selection of games that range from simple to

hardcore! So now it’s your turn to get mad and play on the Hive!