Techolac
Home Games Path of Exile: How to Craft Your Own Progression Gear 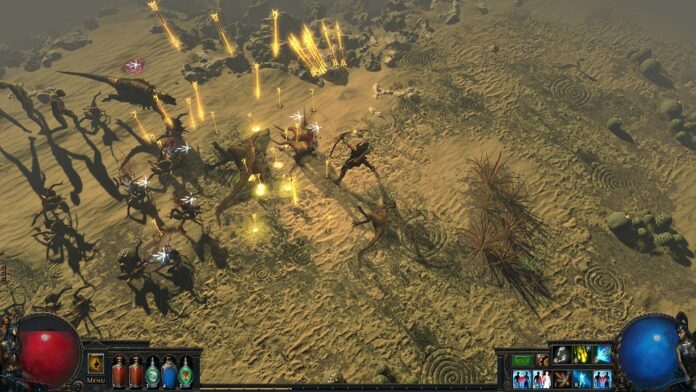 Have you ever found yourself going to a new zone with your head held high only to find that you can’t deal as much damage suddenly? Or that enemies are just harder to beat while they can seemingly take you down with ease? You might not realize it, but oftentimes, the problem lies in your gear—not your character level. Be warned, it can cost much PoE currency to update your equipment. Not to mention you have to manage your orbs well.

Crafting is also how SSF (solo self-found) players can continue their progression, as they can’t PoE trade with others. Here’s how you can craft your progression gear.

You can exchange items and gear in certain combinations to get other items or gear. There are many vendor recipes, though you only need to know a few for crafting.

Those are the recipes for the following:

The former three form a Scroll of Wisdom, Orb of Transmutation, and Orb of Alteration respectively once you’ve collected enough of them. The scroll lets you identify items. As for the orbs, the first lets you transform a normal item into a magic one and the second rerolls the mods on a magic item. Armourer’s Scraps increase the quality of armor. You can also PoE trade in three of them for a Blacksmith’s Whetstone, which is the item’s weapon equivalent. The PoE Orb of Alchemy transforms a normal item into a rare. All in all, these are necessary to craft your own items.

As you go through maps and level up, you’ll get many, many gear and items. It can be daunting to sift through them in one go just to identify which ones to use. To make things easier for you, you should set your optimal equipment. For example, if you’ve set that your build will use bows, you can ignore all other weapons. Sell them through vendor recipes or other players. The same goes with armor, just identify which ones you’re likely to use and modify them.

You can directly reroll rare items with a Chaos Orb. However, if you see a normal item with good links, that may actually be the base for a better-crafted item. The following steps detail the crafting of a normal-rarity item.

Prioritize crafting or upgrading your weapon and armor over accessories. Also, look for good linked gear so you can use skills more efficiently. Don’t be hung up on the rares you get while farming! It’s usually worth crafting your own instead. After all, you can use them on your next character, or sell them to other players through PoE trade.

The process can be frustrating due to the RNG element of changing the mods of the item. Just be patient (if you can afford it) or learn when to compromise. You can always farm for more PoE orbs to use, anyway. If you’re really impatient or fed up, the option to buy from others is always there for those without the SSF flag. Otherwise, you need a break from crafting.

These crafted items can tide you over until you get a PoE unique that fits your build or you get better ones. Take note that you’ll be replacing them soon enough, so you don’t have to get the exact perfect mods for your build.

Minecraft is arguably the biggest game across the world. The main reason for the game's success is the variety of games that have been...
Read more
Games

Let’s Get Ready for Grandmaster Nightfalls

Hardcore Guardians, rejoice! A super difficult activity is coming back and it is time to prepare. However, there’s a good chance that your current...
Read more
Games

OldSchool RuneScape is a game filled with dungeons and monstrosities of all kinds thanks to Jagex’s  game developers who worked hard on creating the...
Read more

What is a lead generation and how can a website generate more leads?

10 Free Mobile Messaging Apps To Send A Text Like SMS