How do I force delete a directory in Linux? 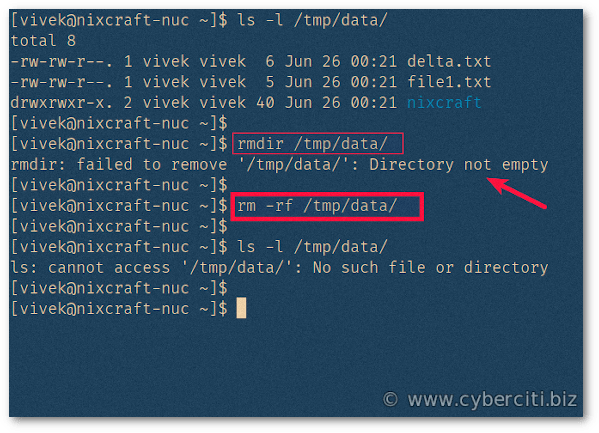 I am trying to delete a directory in Linux using the rmdir dir1 command. But, I am getting an error that read as follows:
rmdir: failed to remove `dir1': Directory not empty

A directory is nothing but a location for storing files on the Linux operating system in a hierarchical format. For example, /bin/ directory would store all executable binary files. This page shows how to remove a directory forcefully when it is not empty using the bash shell command prompt.

How to force delete a directory in Linux

How to remove a directory that contains other files or directories

The syntax is:
rm -rf dirName
Say you have a directory named /tmp/data/ that contains two files and one directory as follows:
ls -l /tmp/data/
If you run the rmdir command, you will get an error as follows:
rmdir /tmp/data/
As explained earlier rmdir only delete the DIRECTORIES, if they are empty. Therefore you must use the rm command to remove a full directory in Linux:
rm -rf /tmp/data/
Verify it:
ls -l /tmp/data/

How do I remove a full directory in Linux with verbose output?

Pass the -v option to the rm command as follows:
rm -rfv dirname
For example, delete a full directory named /tmp/bar in Linux and note down the output on the screen:
rm -rfv /tmp/bar/ 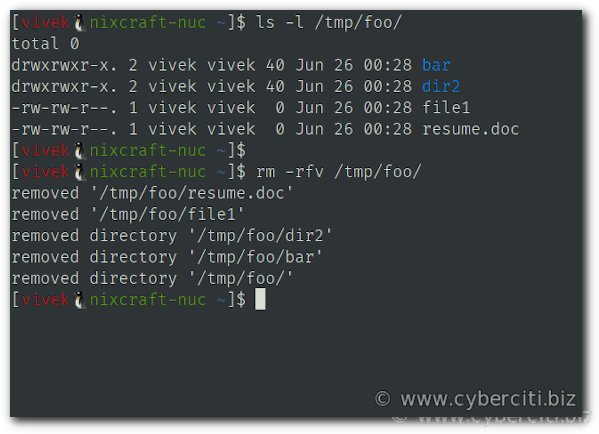 See also  How to become a DBA (database administrator)

In case if you don’t have the permission to delete the folder run rm command as a root user. Otherwise, you will see permission denied message on the screen. Therefore to avoid that prefix sudo at the beginning of the rm command :
sudo rm -rf dirName
OR
sudo rm -rf /somedir/
To remove a folder whose name starts with a ‘-‘, for example ‘-backups’, use one of these commands:
rm -rfv -- -backups/
OR
rm -rfv ./-bacups/

-f, –force ignore nonexistent files and arguments, never prompt
-i prompt before every removal
-I prompt once before removing more than three files, or
when removing recursively; less intrusive than -i,
while still giving protection against most mistakes
–interactive[=WHEN] prompt according to WHEN: never, once (-I), or
always (-i); without WHEN, prompt always
–one-file-system when removing a hierarchy recursively, skip any
directory that is on a file system different from
that of the corresponding command line argument
–no-preserve-root do not treat ‘/’ specially
–preserve-root[=all] do not remove ‘/’ (default);
with ‘all’, reject any command line argument
on a separate device from its parent
-r, -R, –recursive remove directories and their contents recursively
-d, –dir remove empty directories
-v, –verbose explain what is being done
–help display this help and exit
–version output version information and exit