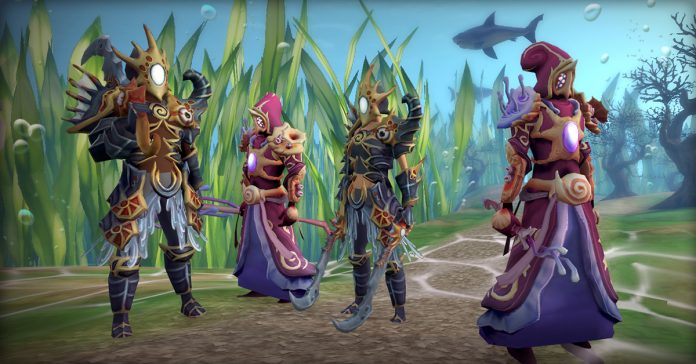 Within OldSchool RuneScape there are physical objects that players can have in their inventory or in their bank. These are called ‘items’ and are distinguished with a unique ID not visible to players. ID’s are used to look up prices at the Grand Exchange and to get extra information about a certain item. Each and every item has a graphic associated with it; in inventory items appear like pictures, when equipped items are in 3D and in a chatbox items appear as bigger versions of inventory pictures. OldSchool RuneScape has many items to choose from ranging from armor pieces, fishing items, runes to prayer items, weapons, quest items, and many more.

As we have seen, OldSchool RuneScape has a plethora of items available and acquiring a certain item necessary for a quest or leveling may prove difficult. That is where Chicks Gold comes in; we offer a wide range of RuneScape items for the most affordable prices on the market – head on over and purchase OSRS items for all your gamer needs.

The main purpose of this article is to showcase the weapons of OldSchool RuneScape and to talk about their bonuses and types. Weapons are equipment pieces that are worn by the player and have to be placed in the weapon slot to equip them and to deal damage in combat situations. One-handed weapons can be used with a shield, placed in the shield slot, and two-handed weapons restrict the use of shields when equipped. Stackable items such as arrows are all equipped at the same time.
Weapons within OldSchool RuneScape have equipment stats, attack, and defense bonuses in melee, ranged and magic combat. Every weapon also has a melee, ranged and magic strength associated with it. These strengths increase maximum damage with that damage type. Additionally, OSRS weapons have prayer bonuses that reduce the rate at which prayers drain points.
Furthermore, weapons have a certain rate at which they attack, called attack speed and a distance at which they can damage enemies, called attack range. Attack speed is determined by a type of weapon used meaning that one-handed weapons will swing faster than two-handed weapons. For example, the swift blade, event rpg and ham joint all have the fastest attack speed of 3, whereas the halberd and two-handed sword have an attack speed of 7, making them very sluggish weapons. Considering the attack range, melee weapons have an attack range of 1 while most ranged and magic weapons have an attack range of 10. Interestingly enough, a halberd is the only melee weapon type that has a ranged attack of 2.
Some weapons within OSRS require different amounts of energy to be used because they have special attacks while wielded. The majority of special attacks are usually of offensive nature, however some are simply used to boost the skill by 3 points.

The world of Gielinor is filled with all sorts of monstrosities therefore adventurers must have adequate weaponry in order to stay alive to tell the tale. Weapons in OSRS are divided into three categories; melee, ranged, and magic weapons.
Melee weapons are used for hand-to-hand combat and do not require ammunition. The exception are few weapons that require charging. Swords, axes, battleaxes, pickaxes, claws, scythes, spears, maces, canes, warhammers and many other items belong to the melee weapons category.
Ranged weapons are used for attacking from a distance and all require ammunition except crystal equipment. Ranged weapons are bows, blasters, crossbows, guns, etc. Thrown weapons also fall under the ranged category and these are darts, throwing knives, thrownaxes, Toktz-xil-ul and holy water. Throwing weapons, logically, can only be used by throwing them and cannot be used as ammunition.
Magic weapons is the final category, and these are used for attacking from a distance however they can be used for melee combat as well. Magic weapons mostly serve for casting combat and non-combat spells. Across Gielinor staffs and wands are mainly used as magic weapons.

Apart from regular weapons that we mentioned in this article there are other weapons that are a bit unconventional. These have to be either assembled on the ground, by combining the base, the stand, the furnace and barrels, such as the dwarf multicannon or caught with net traps such as salamanders, yes you got that right. Salamanders are versatile two-handed weapons that utilize ranged, magic and strength skills. The last piece of unordinary weapon is a shield. Commonly, shields are used for the defense of the player however there is a certain one that can be placed in the weapon slot and used as a weapon. Dinh’s bulwark is the only type of such shield. Other shields can be placed in the shield slot and used to attack enemies with their chargeable special attack. Keep in mind that shields always provide more defensive bonuses than offensive bonuses.

The world of GTA V is vast as an ocean filled to the brim with an absurd number of things to do and see....
Read more
Games

Minecraft is arguably the biggest game across the world. The main reason for the game's success is the variety of games that have been...
Read more
Games

Let’s Get Ready for Grandmaster Nightfalls

Hardcore Guardians, rejoice! A super difficult activity is coming back and it is time to prepare. However, there’s a good chance that your current...
Read more